I attended CodeMash this year and had a great time meeting new people and expanding my brain. Here are five very different things I learned.

Particle Photon and the Internet of Things

On the first day, I attended a pre-conference half day session in a special area called the Microsoft Factory. It was a maker space with 3D printers, laser engravers, and confetti cannons. At the session, we set up a Particle Photon board with a weather station kit by following Paul DeCarlo’s hackster.io tutorial. By the end of the session, I was able to connect some meaning to the term Internet of Things, which seems suspiciously like electronics projects I’ve hacked on before - just add Cloud™. Also, who doesn’t love confetti cannons*?

I attended a session about practical applications of Machine Learning using Azure given by Jennifer Marsman. Having some limited understanding about machine learning and no real experience (or interest) with Microsoft Azure, I was prepared to be a dropout. After Jennifer showed some of Microsoft’s Azure machine learning tools, we dove into a practical application of machine learning to predict whether someone on the Titanic would survive based on various demographic and personal data. The most fascinating take away from the session for me was that with my limited understanding of the topic, I felt confident that I could repeat the exercise and achieve a similar result. I was so impressed with Jennifer’s ability to distill information I made a note to go to one of her non-technical sessions later in the week.

The second day of the pre-conference I decided to sit around and practice Elixir while drinking the surprisingly good conference coffee (The Kalahari staff does an excellent job every year!). I’d done some minor hacking in Elixir prior to that day, but nothing noteworthy. Throughout the day and part of the next, I completed 10 exercism.io exercises and began to think less like a Ruby dev doing Elixir and more like a Elixir dev doing functional programming. I like to think I made our resident Elixir evangelist James Smith proud. Since Gaslight is already doing some Elixir projects and classes, I believe this was enjoyable time well spent.

How to Learn Anything, Starting From Nothing 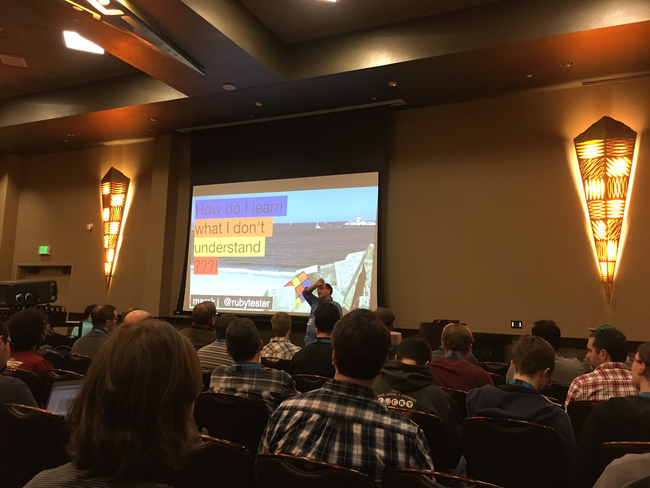 Speaker Marek Jastrzebski convinced me to learn more about the different systems that affect the brain’s ability to learn new things. He utilized material from the book Thinking, Fast and Slow to guide me through his journey of learning to solve Rubik’s cube. As I left the session, the biggest revelation for me was that nearly everyone operates primarily in the part of their brain that jumps to conclusions and has inherent biases. This includes people who consider themselves to be rational thinkers. This session caused me to add Thinking, Fast and Slow by Daniel Kahneman to my “to read” list.

After I returned home, I realized that I’d already been introduced indirectly to these concepts by Gaslight CEO, Chris Moore. In a one-on-one session with me a while ago, he recommended that I read Switch: How to Change Things When Change Is Hard by Chip and Dan Heath. I bumped it up in my reading list and plan to read it soon as well.

React Is Worth a Look

Recently, I’ve worked in several JavaScript frameworks, including Angular and Ember. I’ve avoided looking at React due to something akin to JavaScript fatigue. I changed my mind after I accidentally attended a session contrasting Angular and React in the conference dining hall after lunch. Cory House tore apart the various components of a React app, showed how to use each, and gave some basic performance metrics vs Angular 1 and Ember. I left the session resolved to give React a look.

Because CodeMash is family friendly, there is a KidzMash event every year during the conference that is designed to teach STEM to children of the attendees. It follows a conference style track similar to CodeMash, and it’s such a great event that I’ve been tempted to attend some of the KidzMash sessions as an adult. This year, I overheard a dad mention that he obtained special approval from his child’s principal to treat KidzMash as a week long STEM field trip, so it wouldn’t be counted as an absence.

The last two years, KidzMash has adopted the concept of “open spaces”. Kids claim a time slot in the dedicated open spaces room and talk to other kids about whatever they’ve been doing. This year, my daughter and son learned how to make balloon animals from another child! 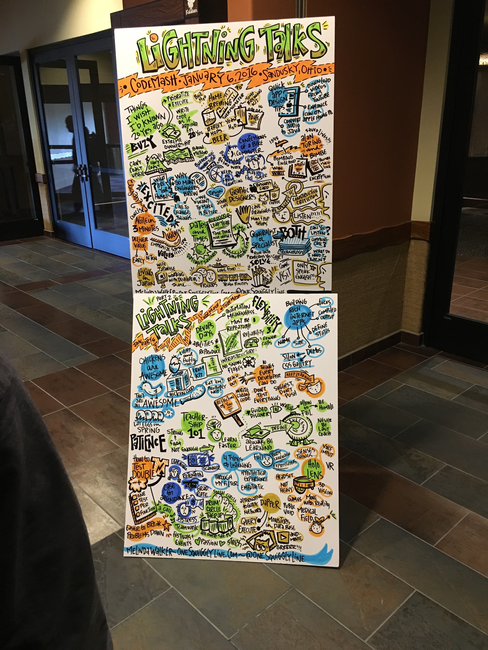 One Squiggly Line was at CodeMash and took visual notes of the larger sessions and events. The conference doesn’t record sessions, so seeing these visual notes gave me the ability to peek in on sessions that I couldn’t attend. I hope they come back next year, and I also hope to find a way to integrate visual notes into my meeting and learning workflow. Of course, mine won’t look as pretty.