Last month at CodeMash I gave a talk entitled “Low Ceremony Microservices with Elixir.” I spent a lot of the talk working through an example auction application in Phoenix. During the talk, I started with a “Monolith” with all of the code directly in the main Phoenix project and gradually extracted a key bit into a separate OTP application that lives in a separate mix project. I hadn’t seen any examples of how to do this, but I found it surprisingly easy to do and thought it would make a useful blog post.

In my talk, I worked through a definitely oversimplified auction site. I separated the front end (an Angular 2 app) from the backend, and in this series, I’ll just be focusing on the Phoenix backend. All the code is in this repo, and I’ve created branches for each step along the way. To follow along, you can checkout the start branch. Let’s take a look at BidController, and specifically, the create method.

This is pretty standard Phoenix code, the only thing I’ve added from the output of the mix phoenix.gen.json is the broadcast code. This just lets all the connected clients know that a new bid has occurred, so they can display immediate feedback to the user. This works fine, but as our application grows in complexity and scale, having the auction managed as a separate process might make a lot of sense. Let’s do that one step at a time.

To begin with, we’ll create a module that Auctioneer.AuctionServer that implements a GenServer. I’ve done this in the gen_server branch.

GenServer processes can track state, and we setup the initial state for AuctionServer by looking up all the Bids from the database. Note this is a deliberately oversimplified 1 item auction or we’d have to be more specific! We change our state by adding return a list with the new bid added to the head as the last element of our tuple.

The code to call the AuctionServer is pretty straightforward, too:

Because we’ve had new_bid return the same response tuple that Repo.create was, most of the code is unchanged.

Notice we’re not calling start_link ourselves. This is because our main Phoenix OTP application can take care of this for us. We do this by adding a new worker in lib/auctioneer.ex.

We’ve added a new worker call for our AuctionServer and given it a name to make it easy to see it in the observer. If you start the app at this branch with iex -S mix phoenix.server you can run :observer.start in the iex session and see the process tree: 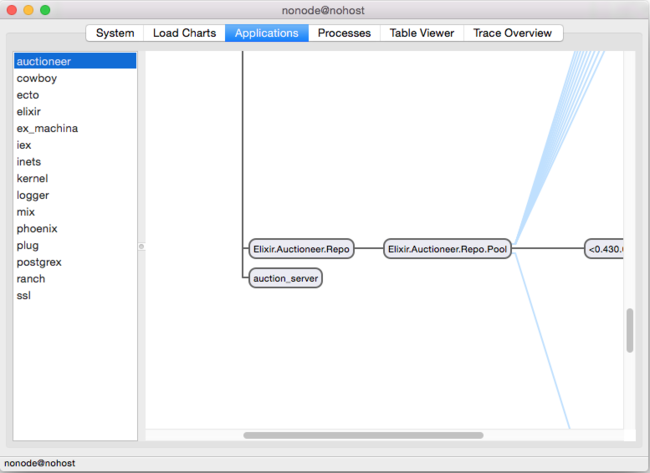 We’re not making much change to how creating bids works yet, but it’s interesting to think about the possibilities that moving this code into a separate process gives us. As a long-time Rails developer, I hadn’t really given much thought to the database being the holder of state for a web app. It’s just kind of what you do. But by making state more explicit, we have more choices. For example, we are still immediately persisting the Bid to the database, but there’s no reason we have to as the state is maintained by the server. We’d need to save off all the Bids when this process terminates, but this could be handled by implementing terminate or with a supervisor.

Having a separate process for the AuctionServer is great, but we’ve still got all our code in the same project. What if our AuctionServer gets interesting enough to need a project of it’s own? It turns out, extracting AuctionServer into a separate OTP application is really easy to do. I’ll be tackling this in the next installment.

If you happen to be in San Francisco, I’m teaching a 3-day class called “Building Next Gen Web Apps With Elixir and Phoenix” March 21-24.